Today I started working on the Library show.  One of the pieces that I hope to create is going to be a large 3D tree. I plan on putting faces and items in the bark which will be made with book pages.  The leaves will be book leaves with the titles and authors of books on them.  I want to make it about 4 feet tall.  I hope that it will be a very special and magical piece.  I had an urge to go into Salvation Army and found two round wooden cutting boards which will be the base and the top.  I believe that making this piece will take several months.  I will work on it slowly in between doing other art.

Posted by Katherine Pippin Pauley at 4:53 PM No comments:

This morning I had the honor of presenting two $500 checks to two art teachers in Springfield.  I am a member of the Springfield Ceramics and Crafts Club.  My job is as Youth Art Outreach chairperson.  The club members feel that encouraging the love of art and crafts among the youth of Springfield is important.  So the club offers two Youth Art Outreach grants each year.  Our first two recipients were Maggie Perkins, art teacher at Ball Charter School, and Kristin Sowinski Langer, art teacher at Washington Middle School.  Maggie will be creating a ceramics unit across multiple grade levels and Kristin will be creating a batik unit for the 7th grade students.  Both teachers were thrilled to have the funds to give their students extra creative opportunities. I was thrilled to have a small part in helping with their vision.

Last night I learned that my rusty hat, The State of the Union, has been accepted as a piece to be shown at the Abraham Lincoln Presidential Museum.  That is wonderful news and I am looking forward to seeing that special art show.

I used to say that I would be an artist when pigs flew.  My friend, Cathy Hendrickson Hathaway, gave me a flying pig (which flaps his wings and flies in circles) for my studio.  Whenever something wonderful happens, artistically speaking, she says, "The pigs are flying."  Well, the last two weeks have been amazing (Cloth, Paper, Scissors blog, two entries accepted into Incite 4, a one-woman show for two months at the Chatham Library, and an entry accepted into the APLM), so I have to agree--The pigs are flying!!
Posted by Katherine Pippin Pauley at 9:52 AM No comments:

Today I picked up the professional photos of the two mixed media pieces that will be published in Incite 4.  She only took two shots of the wall art (The Season of the Witch), but about 30 shots of the rusty hat (The State of the Union).  So I had to select 2 good shots to put on the disc to send to the publisher.

This afternoon I met with Linda Borst at the Chatham Library and got some exciting news.  I will have a solo show for all of June and July this summer.  I will also conduct an art workshop for the library during this time.  I plan on creating a lot of pieces utilizing books.  Some will be collage in which books are used as collage materials and some will be pieces which are about a particular book.  I think that several of them will be 3 dimensional.  There is plenty of space for both wall art and 3D.

I am so happy to have this show.  It gives me a goal--a reason to create.  I really do need a reason because, otherwise, I will just sit and read books.  I do love working on art, but I have to have a place for other people to see it.  Just creating work and letting it sit in the basement is not quite enough for me.  I already have a lot of art just sitting in the basement.

Posted by Katherine Pippin Pauley at 5:44 PM No comments:

Today I have to finish the mixed media piece that I am taking to the gallery on Monday.  I stopped working on it at the beginning of December when I started getting ready for Christmas.  I thought that I would get back to it, but that did not happen with visitors and extra preparations.  So here I am, trying to complete the piece in two days.  Luckily it was about 2/3 done.  What is it?  I am illustrating the song that I wanted to include in my 60s show, Warren Zevon's "Werewolves of London."  But it came out in 1978 so that excluded it from the 60s.  I am illustrating the first verse about going to Lee Ho Fook's Chinese restaurant.  Meise Fahsl told me that the name means Good Fortune.  It was probably great fortune to be mentioned in the song.  I imagine that fans want to go there.  I found a menu online from the restaurant which I printed and am collaging part of it in the werewolf's paw.

I am also completing framing of The Springfield Alphabet which consists of 26 6-inch x 6-inch canvases.  I am entering it in the competition to be shown at the Abraham Lincoln Presidential Museum.  Entries are due on Monday.  I decided that there was no way that they would accept 26 separate canvases, so I am connecting them so that they can be hung from a single wire.  It is a job because the canvases have information on the sides and cannot be connected tightly.  I am leaving two inches between them.  It is an interesting problem.  I hope that it works.  I am also going to enter "The State of the Union" (rusty hat) which is also a problem.  I have to get it professionally photographed for the Incite book before taking it to the gallery.  Monday is going to be a busy day.

Posted by Katherine Pippin Pauley at 2:01 PM No comments:

My artistic journey continues.  I had a wonderful surprise Christmas gift on December 25 when I opened my e-mail and discovered that the Cloth, Paper, Scissors blog/daily e-mail posting was about my piece, The Journey, which was published in Incite 3, The Art of Storytelling.  The online editor, Cherie Haas, called the posting " An Entire World of Possibilities" which is how I ended my story about the piece.  I was so excited that I smiled the rest of the night, even while asleep.

Then, on December 30, I learned that two of my pieces will be included in Incite 4 which will be published in September 2016.  They accepted "The State of the Union" which is a 3D piece made up of rust.  It is a Lincolnesque top hat which I constructed from odd bits of rust.  I have collected rust for about 25 years, picking up interesting bits whenever I see them on the ground.  I knew that someday I would make something of them long before I became an artist.  I created this piece for the Backyard Sculpture Show at the Prairie Art Alliance in September 2014.  The premise was to create art from items found in the backyard (I used the wider sense of backyard to include all over the community).  It won Best in Show.  Then last January I entered it in the Chatham Library Art Show and it won Best in Show again.  So having it accepted into the Incite book for 2016 is like winning the Triple Crown.  I did have this piece for sale, but now think that it is definitely a keeper.

The second piece accepted for Incite 4 is "Season of the Witch" which is the first piece that I made for my 60s show in October/November.  This piece was difficult to create because when I heard the Donovan song, a vision came into my head.  It was of a beautiful, strong woman wearing a grey hooded cape standing in a birch (or aspen) forest.  There were two white birches to her right.  She was a younger woman (about 40) and she had a definite presence.  I tried to create that vision on canvas.  NOPE.  It did not happen.  I tried, painted it out, tried again, painted it out again, and gave up on the vision.  So I let the art direct the scene.  Whenever I am lucky enough to turn the creation process over to the work itself, the piece is wonderful.  Instead of painting the face, I collaged a face from book pages.  She was old and not beautiful.  But she had a presence.  The forest became a thicket of twisted trunks and vines.  The old woman is carrying a basket (woven out of strips of book pages) which has a toad peering out.  The toad is also a collage from book pages.  The other animals in the scene are 7 ravens which are scattered throughout the scene.

My third wonderful bit of news is that the Chatham Library wants me to have a one-woman show there in June/July.  That is very exciting and a little daunting.  I have a lot of work to do in the next six months.
Posted by Katherine Pippin Pauley at 12:26 PM No comments:


My show has been up for a week with no additional sales.  I worked at the gallery last night and most of the people who came in prior to going to the play did not understand that I had illustrated 60s music and that the records would actually play a few seconds of the songs.  After I talked to them and demonstrated, they thought it was really fun.  I did sell a piece of art last night, but not from the featured artist show.  I sold an embellished print that I made of my church, Blessed Sacrament, to a parishioner.


I have had 3 people tell me that they did not understand the angel with the upset woman in Bridge Over Troubled Water.  They thought the bridge was a physical iron bridge.  I see it as faith being the bridge that secures peace.  They said that after I explained, it made sense.  Most people really like Brother Love’s Traveling Salvation Show.  I am surprised that it has not sold.  But I like it too and would not mind keeping it.


Even though the rush of getting the show ready is over, I am still creating.  I finished two frog canvases (collage) for the silent auction for Dancing with the Stars.  One is the wife who is cooking a skillet of flies and the other is her husband who is reading the paper.  I also painted a young Lincoln painting for a local cover contest.  And I am currently working on painting a scene from the Alaska trip that I made 14 months ago.  I took a lot of good pictures on that trip and many would make good paintings.


I am going to concentrate on entering art contests and finding new ways to get my art out since it seems likely that the Prairie Art Alliance will not continue for long.  I may start selling art instead of just cards in my Etsy shop.  But that is a long shot.  It would be nice to have another gallery.  I was in Jacksonville at the Eclectic and in Peoria at the Main Statement, but both are closed.  Art galleries are not faring well in the current economic climate—at least in central Illinois where we don’t know if the state will stay open much longer.
Posted by Katherine Pippin Pauley at 10:59 AM No comments:

Thanks to everyone who came to the opening on Saturday. 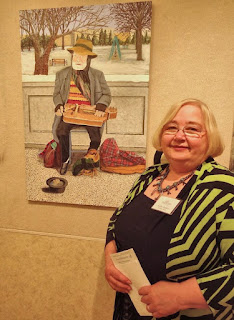 
Kathy and Season of the Witch plus 3D pieces. 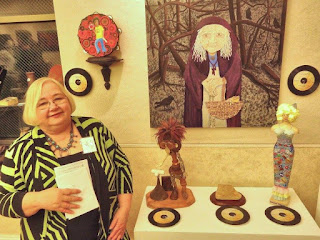 I certainly appreciate your participation and kind words. The show is up until December 3. Six pieces are sold, but there are still lots of nice ones available.  I hope that you get to come in if you have not already done so.  The gallery is open on Tuesday through Saturday from noon until 7 p.m.

Posted by Katherine Pippin Pauley at 8:26 AM No comments: